How does Himalayan Salt wall Benefit your interior space? 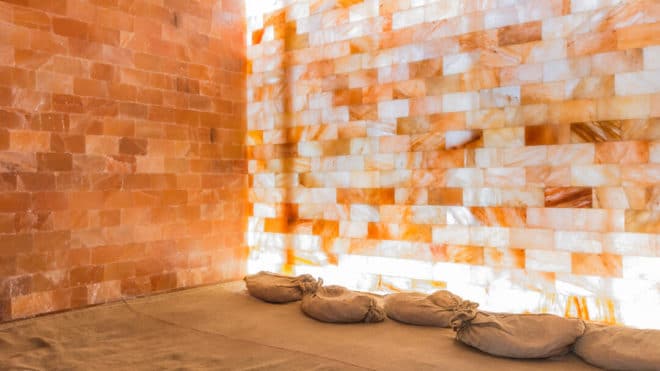 These beautifully illuminated, hand-carved salt blocks add aesthetic value to your space, but more importantly, it boosts guest health. By gently heating the Himalayan crystal salt, the hygroscopic properties of the salt are activated, allowing the natural humidity in the air to condense on the surface of the salt blocks, triggering the natural ionization process. During this process, the salt purifies the circulating air as well as allows our bodies to reap health benefits including stress reduction, energy increases, and mood boosts at a biochemical level. The vast wellness benefits of traditional saunas are well-known and when the effect of pure Himalayan salt is added, the result is a truly unbeatable Himalayan salt sauna experience.

These eye-catching salt bricks are the latest building material for constructing salt walls anywhere in home, office, and restaurant. You can install these salt brick walls in your place to enhance the aesthetic feel. The attractive shades of these walls lift the whole décor of the place.

It is a natural way to relax and calm your mind and body by inhaling salt particles. The salt room is made with Himalayan salt bricks so the negative ions released by salt particles purify the air and improve lung and breathing activity. It feels nice to sit in a warm salt room, particularly during cold and flu season.

Himalayan rock salt is hygroscopic and said to emit negative ions in the surroundings. As the bricks are made with pure Himalayan pink salt that’s why they also release negatively charged ions into the atmosphere. These ions are believed to eliminate the toxicity of the positive ions that emit from electronics. These ions also reduce the effect of electromagnetic frequencies and make the environment clean. This is the main reason these bricks are used to make salt rooms.

Barring any accidents, the Himalayan rock salt bricks can last for a long period. Himalayan salt in its crystalline form is more than 200-250 million years old. That is why the Salt bricks are expected to last for decades if you take proper care.

Build Your own little Garden